Some Time In New York City

This double album was frustratingly released in America THREE MONTHS before here in the U.K. which meant that import copies were appearing before it`s release, which then means lower sales figures are achieved here. The reason for the delay was again copyright problems with Yoko's name appearing as co-writer on some songs. Northern Songs refused to acknowledge this claim.
Also the album was meant to be a single album WITH a FREE bonus album of the "Live Jam", but as usual, it was assigned a catalogue number pushing it into a higher retail price bracket.

Record One was recorded between 1st March and 20th March 1972 in New York with John and Yoko and Phil Spector producing.
As well as the tracks for record one, a number of unreleased tracks are also recorded with Elephants Memory which are :
"Don't Be Cruel", "Hound Dog", "Send Me Some Lovin", "Roll Over Beethoven", "Whole Lotta Shakin Going On", "It'll Be Me", "Not Fade Away", "Ain't That A Shame", and "Caribbean".
Elephants Memory were a New York rock band who were best known at the time for their musical contribution to the 1969 movie "Midnight Cowboy" which starred Dustin Hoffman and Jon Voight (George once owned a car previously owned by Jon Voight).

Record two details are listed below with the tracklisting.

The album cover is designed to look like a newspaper, and along with the lyrics has a few political statements too.
The face in the apple top left is Phil Spector, and underneath the picture it says, "To know him is to love him".
On the rear it says, "This album was completed on March 20th 1972, our third wedding anniversary".
Sleeve concept was by John and Yoko and realized by Al Steckler.
The sleeve design was by Michael Gross.
The record labels do not feature an Apple, but have the John and Yoko "merging heads" design.
The double album also came with a postcard of the Statue of Liberty and a petition about John's expulsion from the U.S. (not included in the American release). 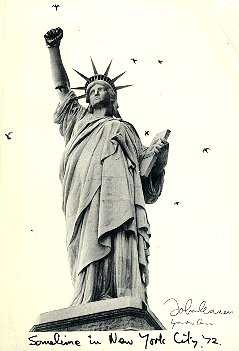 Side three is from a live performance recorded live Monday 15th December 1969 at The Lyceum, in the Strand, London at a concert in aid of UNICEF. Due to contractual problems the sleeve lists pseudonyms for most of the stars joining John and Yoko as shown below.

John introduces "Well" as a song he used to play in the cavern, it was originally by The Olympics in 1958. After that first track, the rest is basically a live jam with no real gap between the tracks.

First pressings (1972) - with printed inner sleeves, and postcard is worth about Ł20.


4th October 2010, to commemorate the 70th anniversary of John's birth a campaign was launched with all John's original albums remastered.
They were each available singularly or as part of the eleven c.d. boxset: The Signature Box
This album was issued with no extra tracks on EMI with a catalogue number of 906 5072
It failed to chart.