Recording started 23rd June 1971 in John's studios in Tittenhurst Park which he named Ascot Sound Studios, and was completed 2nd July 1971. There were also three further tracks recorded ;
"San Francisco Bay Blues" - unreleased,
"Aisumasen" - An early demo for the "Mind Games" track,
"I'm The Greatest" - A further demo of this song given to Ringo.
The strings on the album (the "Flux Fiddlers"), and some overdubs by King Curtis were added in New York at the Record Plant studios on 4th/5th July 1969.

Cover design and photography by Yoko.
First issue copies included the printed inner sleeve as shown above, which printed credits, and full lyrics. Plus a large (33"x22") poster of John at his white grand piano taken by Peter Fordham, and a small postcard (pictured below) which depicted John holding a pig. This was yet another dig at Paul, being a parody of his "Ram" cover snap.
The record label on the A-side has a picture of John with the track info, the B-side has a pale white open apple.
The run-out groove has "Porky" on one side, and "Pecko" on the other. 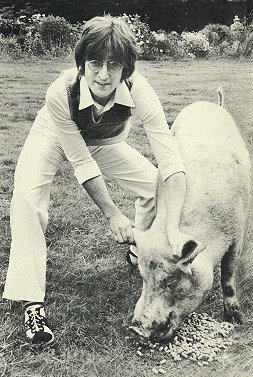 First pressings (1971) - with printed inner sleeve, large poster and postcard is worth about Ł20.

1972 - A Quadraphonic version was issued (Q4PAS 10004), with same enclosures as above and is now worth about Ł75.
Released in a very small quantity, the Apple 33 1/3rd rpm Quadraphonic Record was produced by the SQ System which permits the reproduction of sound from FOUR separate channels when a Special SQ de-coder is used in association with Suitable amplifiers and four loudspeakers. The official Quadraphonic SQ System Logo appears on the top right hand corner of the front of the sleeve. Both record labels show the Quadraphonic SQ System logo as seen below.
The Official Matrix information is as follows: Side 1 matrix: QEX 865-3 - Side 2 matrix QEX 866-4.

14th February 2000 a new digitally remastered and remixed version C.D. version appears, once again with NO bonus tracks.
It was digitally remixed at Abbey Road in the autumn of 1999 under the personal supervision of Yoko.
It has an Apple in the corner of the rear just like the album sleeve above, but the words "Apple Records" do not appear anywhere ... Parlophone does, therefore this is now listed as Parlophone with a catalogue number of 524 8582.

The cover front is the same as the vinyl, with the rear being pretty similar to the original too, with just a tracklist added. Inside the C.D. rear is a close-up picture of John's ear.
It does come with a 16 page booklet though, which includes the song lyrics, full information AND some terrific pictures, a couple of which I show below.

4th October 2010, to commemorate the 70th anniversary of John's birth a campaign was launched with all John's original albums remastered.
They were each available singularly or as part of the eleven c.d. boxset: The Signature Box
This album was issued with no extra tracks on EMI with a catalogue number of 906 5022
It failed to chart.